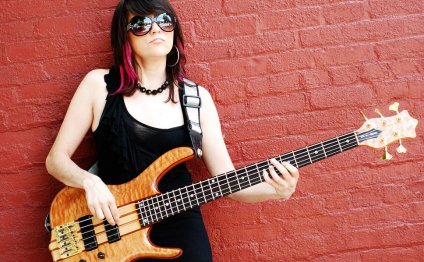 When i go higher quality i use a fairly cheap
Vado HD 3rd Generation (Black) pocket cam for the video.
For audio i record my bass through my TC electronic RH 450 amp (direct output, post eq) into a Apogee Duet soundcard into my Macbook running Logic Pro 8 set to 48khz (important sinceits standard video sampling rate, you cannot use 44khz)
For speaking I have a Audio Technica headphone omnidirectional microphone I have mounted on a stand (the mic also picks up a little bit of the acoustic sound of the bass giving some nice ambience)
I then import the video into Logic Pro and sync the audio/video (get rid of the original audio from the cam)
Export the movie with new audio from Logic (video is left unharmed, only audio is replaced)
Import the movie into iMovie 09, edit and add titles.
Export from iMovie to the best quality (HD) and upload to Youtube or blip.tv .
Its pretty time consuming compared to the old Korg method, it adds at least an extra hour of work, not counting the export process that can take additional hours depending on the length of the movie (HD makes big files)

Making videos for youtube the easy way, a picture tutorial

NOTE! The reason im using a channel splitter from the Pandoras PX4D’s output is that i want to monitor my bass before the computer thus eliminating any latency.

Favorite settings on the Pandora is:
STUFING as startingpoint, but tweaked as follows:
DYNA: COMP, 5.0
AMP: LA STUD, 5
CAB: MTL 4X 10, 4.0
MOD: FX OFF generally, but sometimes FILTUP1, 6.3 for autowah or CHORUS2, 0.6 for Chorus
DLY: FX OFF
REV: FX OFF generally, but often for solo stuff WETAIR, 5.3 for a nice ambience effect
I adjust the gain/mid, bass, treble and volume knobs (top section on Pandora) to the bass used

If you are thinking of buying a PX4D or PX5D online, please do through the picture links on Playbassnow.com, i get a tiny percentage of the sale and you hereby support my efforts

A new updated version is on the market the Korg PX5D, now doubling as an audio interface, plus more sounds and rhythm patterns. Its definately on my wish list

In this series of lessons we will explore various fingerstyle blues guitar styles and techniques. This first lesson focuses…