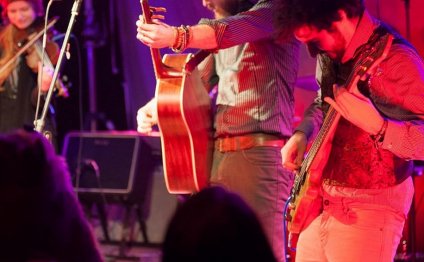 Peter began his interest in music when his Dad made a bush-bass from an Akta-vite can and timber. Formal music started in grade three with the Heathmont State School recorder band. After tinkering with the piano and teaching himself ukulele he took up Violin in grade 5 then Guitar in grade 6. Violin studies continued for the next 6 years alongside Guitar. Peter learned classical guitar from Joh Reuker and Music Theory at the Melba Conservatorium. He played rock with friends and at gigs, played in orchestras, took Jazz guitar lessons, studied music at Latrobe University, recently attained Diploma of Music Tuition from MWT Institute (2013)

Since the 1980s Peter has continuously taught guitar privately and at schools, performed solo and in so many rock, dance, country, jazz, blues & pop bands, mandolin orchestras; arranged, trained a school orchestra, presented students for exams; performed as a guest Soloist for Concert Bands playing everything from Rodrigo and Villa-Lobos Concertos to Led Zeppelin, Santana, Queen & Metallica and has undertaken commercial recordings.

Peter loves to perform, teach, record & learn all sorts of music and is fascinated by its structure.

He dabbles with audio Electronics and has been influenced by fine Solo guitarists like John Williams, Tommy Emmanuel and Mason Williams; electric masters like those from Deep Purple, Pink Floyd and Dire Straits. He loves Classical, Jazz, Latin and Rock.

“This versatile, expressive yet mechanically-simple instrument keeps always keen. It will engage me for life”

“Bass is great! You make the band’s foundation, its pulse. Solo guitar is bass, lead & rhythm combined; what a blast!”

The rite of passage for members of the Satere-Mawe tribe of Brazil requires wearing a glove filled with bullet ants, whose…

Gunther swung open my office door with a violent jolt and glared at me jealously. He wasn’t amused to see me sitting on the…