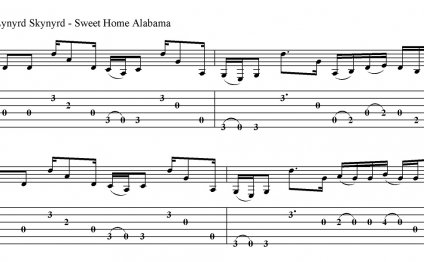 In 1973, a band from Florida and California went to a studio in Georgia to record a song, provoked by a Canadian, about Alabama - and managed to define the sound of Southern rock while they were at it.

Lynyrd Skynyrd in 1973. From left to right; Leon Wilkeson, Billy Powell, Ronnie Van Zant, Gary Rossington, Bob Burns, Allen Collins and Ed King.Photo: GEMS/RedfernsThe quintessential Southern rock band, Lynryd Skynyrd not only performed some of the grittiest, most uncompromising blues-driven music of the '70s, but thanks to the songwriting of frontman Ronnie Van Zant and the hard-living, good ol' boy image of its members, also established themselves as the archetypal proponents of Southern pride and defiance. After all, if Neil Young had the nerve to use numbers such as 1970's 'Southern Man' and 1972's 'Alabama' to portray many Southerners as a bunch of Klan-loving, banjo-playing hicks who needed to forgo lynchings in favour of civil rights, then Van Zant certainly had the balls to respond.

"Well, I heard Mister Young sing about her, " he intoned on 'Sweet Home Alabama', the opening track on Skynyrd's 1974 Second Helping LP. "I heard ol' Neil put her down. Well I hope Neil Young will remember, a Southern man don't need him around, anyhow."

Although the song served as both a celebration and a vindication of the 'Yellowhammer State', the irony is that neither Van Zant nor his two fellow composers were originally from Alalabama. He and band co-founder/guitarist Gary Rossington were born in Jacksonville, Florida, while guitarist Ed King was from Glendale, California. 'Sweet Home Alabama' was, nevertheless, a top 10 hit in the US, and has subsequently become a staple on AOR radio stations, while in 2006 Country Music Television voted it number one among the 20 Greatest Southern Rock Songs.

The group themselves first came to prominence with the release of their 1973 debut album, Pronounced Leh-Nerd Skin-Nerd. Produced by Al Kooper, who had signed the band to MCA the year before, this included 'Freebird' and featured the three-pronged guitar line-up of Rossington, King and Allen Collins, together with Bob Burns on drums, Leon Wilkeson playing bass and keyboardist Billy Powell. The same personnel then reassembled for 'Sweet Home Alabama', again with Kooper sitting behind the console at Studio One, a facility located in the Northern Atlanta suburb of Doraville, Georgia, that had been designed and constructed by engineer Rodney Mills, with assistance from music publisher Bill Lowery and future Altlanta Rhythm Section manager Buddy Buie.

Photo: GEMS/RedfernsA former bass guitarist with a Georgia outfit named the Bushmen, Mills became the chief engineer at Atlanta's Lefevre Sound Studios in 1968 and recorded a wide variety of rock, R&B, country and gospel acts, including Joe South, James Brown, Billy Joe Royal and the Stamps Quartet. Then, in 1970, Buddy Buie commissioned him to design and oversee the construction of Studio One, and Mills remained there for the next 16 years, engineering and/or producing records by, among others, BJ Thomas, the Outlaws, Journey, Johnny Van Zant, the Atlanta Rhythm Section, 38 Special and Lynyrd Skynyrd.

"The setup at the time of the first Skynyrd album included a Spectrasonics four-bus custom console made by a company out of Louisville, Kentucky, " Mills recalls. "It had a 16-channel monitoring section and was primarily designed for 16-track, which was the highest multitrack then available. It was a discrete console, with all of the sections divided independent of each other, and the monitor section was laid out to the side instead of in-line, as it would become later on. We did not have a lot of discretion in terms of the EQ — the EQs had three sections on the low end, and there were three frequencies available on the high end. There was no mid-range EQ. The control monitoring section was strictly a level and pan, and that was it. You couldn't add any effects to playback at all.

"The console sounded pretty good for those days, although the only other one I had worked on at that point was the custom-made four-bus console at Lefevre Sound, which had Langevin equalisers and an eight-track capacity. When we built Studio One, that was eight-track as well, and we then switched to 16-track and used a Scully 100 two-inch tape machine, which was a low-economy model. For monitors we had JBL 4320s, which each had a single 15-inch woofer with a mid-range horn, as well as a compression tweeter that I added, and there were also some small Auratones sitting on the console."

As designed by Mills and Buie, Studio One's live room was V-shaped, with the pointed end at the front and a rear section that widened into a rectangle. Total length from front to back was about 50 feet. The live area wrapped around the control room 'V' and was about 10 feet wide on either side, with a length of 30 feet from the tip of the 'V' to the end of the live area. The console was positioned towards the front of the control room, and the monitors were on either side, suspended from the ceiling and angled inwards. By 1974, those speakers were placed inside specially constructed soffits.

"The way Buddy primarily liked to work was to have the musicians around him, " Mills explains. "The console was therefore placed as far forward as possible in the control room, so that we could see the guys on either side out in the studio. That worked OK part of the time; since the majority of the flooring in the control room was elevated, we could set up a little higher than the musicians and see them better. However, most of the time the guitar players and bass players would all sit in the control room and have their amps in the studio on either side of that 'V'. The 'V' itself was all glass, but we didn't let stuff like monitoring and reflections get in our way! I wound up putting curtains over those windows to cut down on some of the reflection, but that was it."

While Rodney Mills recorded a small amount of Lynyrd Skynyrd's first album, including the basic track of 'Tuesday's Gone' and guitar overdubs on 'Freebird', he was also involved with another project, so the assignment mainly went to Studio One's other in-house engineer, Bob Langford.

"There was only one room, and we worked that studio day and night, " says Mills. "If you wanted to cut in there, you could take the day shift or the night shift. There were no strict hours, so the only way of doing two projects at one time was for one of them to run from, say, 11 in the morning to seven in the evening, and then for the other to run all the way through the night until the next morning. That's how it worked with Skynyrd on the first album, and after it was completed the band came up with a new song and decided to go back into the studio to record it because they thought it might be strong enough to hold up the album's release."

That song was 'Sweet Home Alabama', and although it didn't end up being included on the first album, it was in the can before the commencement of sessions for Second Helping. And on hand to take care of the engineering was Rodney Mills.

With the growing popularity of rock music in the mid-to-late Sixties, a great many young up-and-coming musicians were inspired—and…

It’s always fun to write a bass lesson associated with one of David’s guitar lessons, in this case our song lesson on Van…