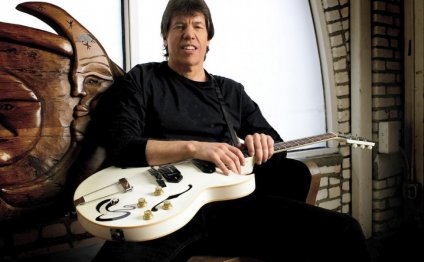 How to take your first slide into the blues

Late one night in1903, in the Mississippi Delta town of Tutwiler, W.C. Handy-the man who was later to proclaim himself "inventor of the blues"- had fallen asleep on a bench in a railway station while waiting for a train. He was awakened by the sound of another black man, shabbily dressed, singing and playing guitar in an unusual manner - instead of fretting the neck with his fingers, he was sliding a knife up and down the strings. The musicians moaning singing style and the guitar thus played struck Handy as "the weirdest music I have ever heard in my life."

Handys description of his encounter with this unknown blues player gives us an early glimpse of slide guitar, which is the technique of using a smooth, hard object-usually a hollow metal or glass cylinder-to change the pitches of the strings. Also known as bottleneck guitar (the necks of bottles make good slides), this style had its origins in African one-stringed instruments and also, some say, in Hawaiian guitar styles, which were brought to the south by Hawaiian soldiers during the Spanish-American War. Slide guitar was played by several important bluesmen, including Eddie "Son" House, Tampa Red, Robert Johnson, Muddy Waters, Elmore James, Blind Willie Johnson, and others. Because it offers effects unavailable with conventional guitar technique such as glissandos, voice-like cries, and notes between the frets, it is worth learning at least a bit of this style. In this article well take a look at slide guitar and try some riffs and a blues solo in open D tuning.

First, youll need the slide itself. They are usually made of metal or glass and are available in most music stores. Metal slides are louder; glass ones pro- duce a smoother sound. Alternatives to commercially manufactured slides are lipstick holders, -inch spark plug sockets, Coricidin bottles, or what many slide guitarists prefer: a straight neck from a wine bottle such as Mateus, fifth size (it has to be carefully cut or broken off from the bottle, and then the cut has to be ground down until smooth). Any slide you do use should be both wide enough to fit loosely over your pinky finger and long enough to cover all six strings of the guitar.

Because slide guitar is usually played in open tunings, youll have to do some retuning. The most commonly used slide tunings are open E (from the sixth string to the first, the notes are E BE G# B E), D (D A D F# A D), and G (D G D G B D). The open E and open D tunings are the same except that open D is tuned a whole step lower than open E, Of these two I recommend open D; open E creates additional stress on the neck and top of an acoustic guitar because it raises three of the strings (third, fourth, and fifth) above their normal pitch.

Here are diagrams for the primary chords in the key of D in D tuning: (right).

I advise using medium-gauge strings with the action set no lower...

The slide should fit loosely enough to allow you to bend your finger slightly. Then place the thumb behind the neck and position the slide on the first string directly over the 12th fret. The slide should be both perpendicular to the string and parallel to the frets, and it should lightly rest on the string without pushing down. The index finger must also rest lightly on the string- this "damping" of the string helps pre- vent unwanted buzzes or rattles.

“He gets more of an open, slidey sound. But here’s the way to really tell: He played the Fender, and I played the Gibson…