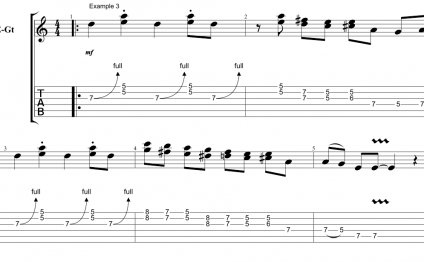 Sometimes I look at these “Easy Songs for Beginners” and I have to wonder if I’m going to get tarred and feathered. Oh, it’s not that they are hard (they aren’t) or that even the theory involved is too difficult (I truly hope it hasn’t been), but I just hope that everyone is having fun with them. And is patient with me. You may have noticed I have this tendency to try to cram a lot into these lessons. It’s not always easy explaining some of the things we’ve covered purely with words and diagrams and I am not always certain I’ve gotten things across in the best possible way. But you can always write me for more details. Ah well, enough digression…

August is musical genres month here at Guitar Noise and I have to admit that my picking this topic was a sneaky way to slip some lessons into the mix. Today’s song is Bob Marley‘s I Shot The Sheriff, which will not only serve as a delightful introduction to reggae rhythms, but I’ve also managed to get very sneaky and throw in some transposing as well.

Let’s look at the chords and transposition first, shall we? On the CD that I am using (“Legend”), this song is in the key of G minor. How do I know that? Well, if you’ve read some of my past columns, particular the trio on ear training, you’d know that I sat down with my guitar and the CD and played around until I got the chord progression. In terms of song structure, Sheriff can be broken down into two parts: the chorus (the “I shot the sheriff” part) and the intervening verses, which tell the story. There is also a little instrumental riff which separates the two, but we will come back to that later (good lord! More things to learn!!)

The chorus has two alternating chords, Gm and Cm, and goes like this:

The verses have the following chord progression (the number of beats is in parenthesis):

Now I don’t know about you, but this does not at all look like an “Easy Song For Beginners!” But take heart! You have all read my column on transposing called Turning Notes Into Stone (and if you haven’t now’s your chance to sneak out and do so! Don’t worry, we’ll wait right here for you…), so you’re all whizzes at the art of transposing.

Ready to make this a bit easier? Alright, then, since I have no intention of playing this as nothing but barre chords, I have to come up with another key in which to play it. To me, there are two obvious choices – A minor and E minor. As you’ve read, I prefer use a key lower in pitch whenever possible so that, with the aid of my trusty capo, I can still play along with the CD. So I opt for E minor. E is one and a half steps down from G, so all my other chords are going to have to be one and a half steps down as well. Let’s figure it out:

Now that looks a lot easier, doesn’t it? And if I put my capo on the third fret (that’s one and a half steps, remember?), then I am playing in G minor again. So here are the chords we’re going to use:

Let me point out that there are a lot of ways to play the Bm chord (yes, not to mention every chord!). For this song, I prefer to use this voicing and we’ll look at the reasons for this shortly. But first, let’s get our rhythm down.

Having made the chords user-friendly, let’s see what we can do about the rhythm. Like all the things we’ve been doing, we’ll start out fairly simply and then get a bit more complicated as we feel the confidence to do so.

Playing a reggae rhythm guitar involves playing on the offbeat. Just what does that mean? Well, let’s say we have a song in 4 / 4 time (and, thinking about it, I can’t remember ever playing a reggae song that wasn’t in 4 / 4 time), you would count it out like so:

Nothing could be simpler, right? This is how we count the beat of any song, at least any song done in 4 /4 time. But we already know from our past lessons that we can subdivide this into eighth notes or into triplets:

Here you see that we have notes in between the “beats, ” between the actual number count if you will. This is the “offbeat.” To get the reggae rhythm, we will strum our guitar only on the offbeat, that is we will strum on the “and” or the “and a” parts of the measure.

Johnny B Goode, Chuck Berry (Guitar Lesson) How to play

For Long Island guitar lessons, you can’t go wrong with Rock-N-Roll University. We are the most advanced and approachable…

Guitar lessons are one of the most popular choices at Morningside School of Music. Electric, Classical, Acoustic, Rock, Jazz…