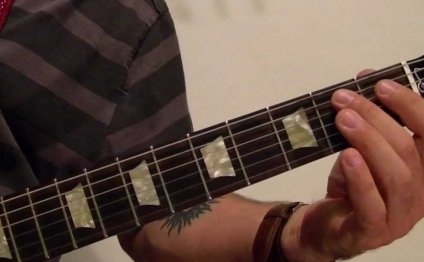 I Walk the Line Guitar lessons

In this lesson we will take a look at a concept that is becoming more and more in demand these days: combining chord comping with a walking bass line.

As club and restaurant owners are cutting budgets, one way to keep our gig as a guitar player is to slim down the ensemble to a duo or solo situation.

Being able to walk a bass line and comp the chords to a tune at the same time is an invaluable skill to have and one that will allow us to work in situations where other guitarists cannot.

An example of this would be if we are going to an F7 chord the two approach tones would be E (below) or F# (above).

This allows us to add a sense of voice leading to our bass line and immediately brings it into the jazz idiom, as chromatic tones are very common in jazz. We are now playing what bass players refer to as "half time", where the half note is the rhythmic focus of the line.

Notice that we now have a rhythmic change in the last two bars. Because the chords move twice as fast in these two bars we have to use quarter notes when adding our approach tones. This leads us nicely into step 3 which will deal with what bass players refer to as "walking time", where the quarter note is now the focus of the line.

Now that we have introduced a quarter note pulse in the last two measures of example 2 we can now "walk" a bass line through the entire blues progression. When adding the extra notes there are two things to keep in mind.

The first is that the last note before a chord change should be our approach tone, now written as a quarter note, and the second is that we can use to fill in the remaining quarter notes.

One thing to notice is the use of the Ab in the first bar over top of the F7 chord. This note can be seen from two angles, the first is that it belongs to the F blues scale and the second being that it chromatically connects G to A, our approach tone. Again we see an example where chromatic notes are added to the line to make it more "hip".

Now that we can play through a bass line in both half and walking time we are ready to add some chord voicings on top of our line. The next step then, is to find some easy to grab voicings that sit on top of the root of each chord. Of course there are many voicing's out there that will fit over these chords but for our purposes we will look at two basic shapes, the 6432 and 5432 string group shapes.

Now that we have the bass line and the chords under our fingers it is time to bring them both together. For now we will only put the chords on the first beat of each new chord or new bar. Once you get a handle on this concept feel free to add the voicing's to any beat and to add inversions and chord substitutions as you see fit.

The voicings will appear on the "and" of the first beat. This is a common rhythmic choice for guitarists who walk and comp at the same time, but again once you have this idea down feel free to put the chord in any part of the bar.

Now we are ready to take these same steps and apply them to any jazz tune, be it a blues based tune or standard 32 bar tune. You might want to try writing out the steps, as above, when first applying them to other tunes, and once you are proficient at writing them out try and walk/comp on the fly.

Hi! I’m Nate , I have been playing the guitar for a little over 2 years now. After my long journey of watching some of the…

Hi everyone. As most of you know, my name is Shaun. Normally, I talk about fixing and building guitars, but let’s talk about…