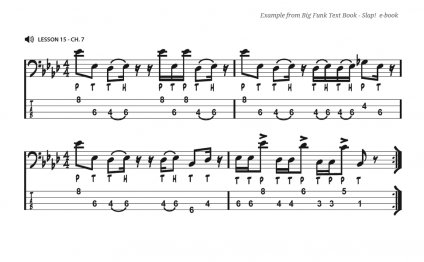 In this video bass lesson I’m going to show you a fingerstyle funk bass groove in the key of A. So let’s get funky!

So to start, here’s the bass tablature for this riff…and then I’ll break things down a little.

So this funk bass groove is build mostly from the notes of an A7 chord, as well as some notes from an A minor pentatonic scale.

The first section of the riff is just the root of the A7 chord, the octave…a b7, and then a couple of chromatic approach notes leading to the 5th of the chord (4 #4 and 5).

The numbers that I’m using here are just how the notes relate to a major scale. So when I say b7 (flat 7), that’s just the 7th note of a major scale lowered by a half step (1 fret).

The next part of this funky bass riff starts out the same as the first, but then at the end has a b3 leading to the 3, and then to the b7. So again, mostly just notes of the chord, but a chromatic approach to the 3rd of the chord. So b3 which is not in the chord, leads up to the 3 which is.

The 3rd section of the bass riff is exactly the same as the first.

Slap bass is a technique mostly used in bass for funk or forms of jazz. It involves striking one of the lower strings with…