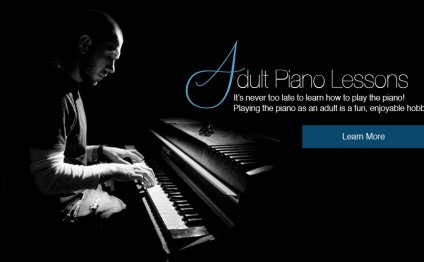 It is impossible to count the number of times we piano teachers have heard, “I wish I had learned piano as a child.” Adults assume that if they didn’t learn to play piano as a child, then it’s simply too late.

Yet not only are adult piano lessons more often than not extremely rewarding, but adults have a number of advantages in learning piano compared to children.

1. Adults learn of their own volition. Children very often have to be persuaded to practice and attend piano lessons. Adults, on the other hand, don’t need to be dragged, kicking and screaming, to their piano teachers. (Admittedly, I do know some teachers whose lessons I’d be kicking and screaming to avoid.) Adult piano lessons are thus almost invariably a pleasure for both student and teacher.

2. Adults have highly developed logical and critical thinking skills. It is often thought that playing music is a purely creative, right-brained act, but this is by no means the case. As the most emotional of the arts, music indeed favors the Dionysian right brain compared to the Apollonian left. Yet so much of interpreting music is a matter of basic analysis, of understanding music’s harmonic vocabulary and what the composer is doing with the musical material. Playing music without understanding these essentials would be like learning to pronounce syllables in a foreign language but having little or no idea what the words mean.

3. Adults can learn complex concepts much more easily and understand technical explanations. This makes it possible for adults to learn music theory and analysis far more easily than do children. The importance of being able to analyze and understand a piece of music from the beginning of study cannot be overstated. Nothing is more common than students who attain skill on an instrument but who have only a rudimentary understanding of the music, which severely limits their playing in ways they cannot imagine. I believe much of this state of affairs arises from children who learn notes before they are able to comprehend them, and their knowledge of harmony and theory never catches up to their finger skill. Adults, by contrast, are able to grasp the elements of music and musical structures quite readily, like a scientist who understands how the world works.

4. Adults have developed attention spans. Children’s attention spans, by contrast, are often limited to only a few minutes at a time. It takes careful concentration to learn the piano, and adults have a considerable advantage in this regard. Progress on a musical instrument is a matter of accumulating many hours of concentrated, careful practice. (Practicing without concentration is not only unproductive, it is outright destructive to your playing.)

5. Adults are emotionally developed. Music, after all, is the most directly emotional of the arts, and its wide spectrum of emotions can only be expressed and comprehended by those who have experienced those emotions themselves. Emotion in music has very much to do with musical vocabulary (harmony, or how tones combine) and how they extend in time and create musical forms. The former is music’s vertical dimension (notes in relation to one another at any given moment), the latter its horizontal (how notes relate to one another in the listener’s aural memory).

Adult Piano Lessons - Can I Only Learn The Piano As A ...

First lesson of an adult beginner. Piano exercises and games

Featured as one of The best piano apps for iPad - AppPicker.com Piano Tutor for iPad is the best companion to your music…

San Jose School of Music is the largest music school on the Avenue in Downtown Willow Glen, San Jose, CA. We offer quality…