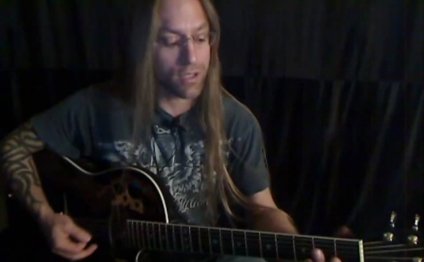 From going viral on YouTube to touring the world, Walk Off The Earth has made an impressive mark on the music scene, and from the looks of it they are just getting started. Their album Sing It All Away will be released this month, and the band has been touring heavily in anticipation of this release.

Singer and guitarist Ryan Marshall gave us a call this week to talk about his inspirations, life on the road, and his complicated relationship with country music.

How did you get started playing music? Was there anyone like a parent or teacher who really helped you along the way?

I come from a family where everyone has always played some sort of instrument. But for me in grade six, I started playing baritone, which is like a small tuba; some people call it a euphonium.

I had an amazing music teacher. I lived in a small town near Toronto and I had this teacher Sue Smith, who had been the trumpet in Canadian Brass. She actually came to my school and I started with her in grade six and then she came to my high school and continued teaching our class all the way through high school.

When you get a teacher like her it really changes the way you look at things and it makes you want to continue playing. I was the captain of the football team and the basketball team, and sometimes, when I was going to school anyway, the sports guys aren’t too keen on people playing in the jazz band or the concert band. But when you get the right teacher who explains things and helps you deal with peer pressure and all that junk, you can learn a lot.

Coming from that education, how did you form Walk Off The Earth?

I hooked up with a couple of guys and we started a little reggae band that lasted a few years. When that band ended, I continued playing with my drummer, and we wanted to start recording a little two piece project.

He knew this guy Gianni who had his own studio, so we went there to record. Gianni started adding some bass and things into the stuff we were recording. We hadn’t even played a show yet and we didn’t have a bass player, so it just kind of turned into a three piece. We needed a name and Walk Off The Earth just kind of happened, and that was the beginning.

One thing that really stands out about Walk Off The Earth is your instrumentation and the really cool, kind of unusual choices that you make. Where do you get those ideas and what inspires you?

For Sarah and Gianni and I, it’s kinda like this: none of us are amazing guitar players and none of us are amazing ukulele players, or whatever it might be, but once you kind of understand the idea of the instrument, if you can shape a chord or something, as long as you have good rhythm you can get away with playing a couple songs on it here and there.

All of us are really interested in learning different instruments and finding things to add to the set. Sometimes it ends up being little kids instruments, and it’s fun to take something like that and say how can we sample it, or how can we record it. Then once you put it into a recording, you’re kinda stuck, and you have to figure out a way to do it live, so you end up bringing all these weird instruments live on stage.

Another thing that Walk Off The Earth is really famous for is that you “got a record deal on YouTube”. Was that something that you set out to do? What would your advice be to other artists who want to follow that same path?

We did the indie band thing, trying to get signed by a label in conventional ways, and it’s really tough. It finally got to a point where we all realized, we’re not going to get signed to a label, we’re going to have to do this on our own.

We had to find a way to reach a lot of people, and YouTube had just started up. Gianni said hey, why don’t we give this a shot? We put up some videos and all of a sudden we had 15, 000 views on a video (editor’s note: that video now has over 160 million views). We’d never played to 15, 000 people in our lives!

We also had another 30 or 40 videos already on that channel, so when people saw the viral video, it wasn’t like a dog that was talking and all of a sudden there’s nothing else to watch. There was a whole catalog of songs, originals and covers, that people could watch next, and we noticed those all started blowing up at the same time.

That also was the thing that attracted the label. Labels want to see a body of work and a fanbase before they put money into a band these days. You have to develop your career yourself.

Starting my new Weekly Blues Lick series is a great lick from Stevie Ray Vaughan. Love this lick, sounds great and can be…