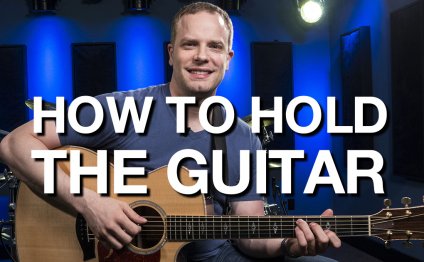 Welcome to video four in the Beginner Guitar Quick-Start Series. In this lesson, we’re going to learn about the parts of the acoustic and electric guitar. Knowing these parts is really important because you need to be able to communicate clearly with other guitar players about your instrument.

We’re going to start with the parts on the acoustic guitar, and most of them actually overlap with the parts on the electric guitar, which we’ll see later. Starting on my left hand side, this end of the guitar is the headstock, which is broken down further into more parts. We’ve got the tuning keys, which are used to tune the strings of the guitar. Connected to the tuning keys are the tuning pegs, or string pegs, and that’s where you attach your strings to the guitar.

Working our way down from the headstock, the narrow white strip is the nut. The strings rest on the nut before they go to the tuning pegs. Next we have the neck of the guitar, which is also broken down into more parts. The skinny metal strips along the neck are called frets, and the frets are connected to the fretboard. The fretboard is the piece of wood that runs all along the neck of the guitar.

Most guitars have fret markers, which can add to the aesthetics of your guitar and also help you keep track of where you are on the guitar. You may have simple dots or something more fancy like the fret markers on my guitar.

You can see in the video that I have a strap on my guitar, which is attached to strap buttons on the front and back of the guitar. Your acoustic may not have strap buttons, so you would want to buy a strap that has a shoelace so it can be tied around the neck of your guitar.

An electric guitar has many of the same parts as an acoustic guitar does, but there are also some major differences. Taking a look at my electric guitar in the video, you can see that the headstock, tuning keys, frets, fretboard, neck, and the main body are the same.

Two of the main differences on electronic guitars you should know are the pickups and the controls. The pickups are the microphones of the guitar, picking up the vibrations of the strings and moving them to your amplifier. There are two basic varieties of pickups: humbuckers and single-coils.