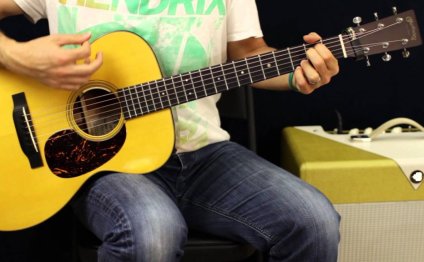 ‘Power' Chords are used in most styles of music but are particularly useful for rock guitar; they even sound cool on acoustic (check out Nirvana's Unplugged album for an awesome example). The basic idea is that you only have to learn one chord shape, and that one shape can move around the fingerboard to make other chords. It uses no open strings, and muting the unused open strings is a very important part of the technique.

Lets start by playing some power chords, and do the theory later

Use your 1st, 3rd and 4th fingers as shown, and start by putting your 1st finger in the 3rd fret of the sixth string (the note G). Then put down your 3rd and 4th fingers. If this is a bit of stretch, don't worry, you will soon limber up! Try to keep them together, the 3rd finger kind of on top of the 4th as shown.

Some people like to play the two notes on 5th and 4th strings with a small barre with the 3rd finger. It's O.K. to do that, but I think using two fingers gives you a better finger position on the notes; you'll get a better sound that way, it makes it easier to change chords most of the time and easier to get all the thin strings muted. I strongly advise to learn it this way, and then if you still prefer to use the little barre you have the option of choosing whichever one works best in any situation!

Try and keep your middle finger relaxed just hanging out where it feels good (shown in the top photo). Don't try and pull it down to the thin strings; sometimes I do that but only when trying to show the chords in lessons

Try to get your 1st finger to lay softly on strings 3, 2 and 1. You don't want those notes to sound; you just want to mute the strings. This is very important as it will sound really bad if you let them ring out.

You could just try to be careful, and only play the three strings of the chord, but that is really hard. It means that you will never be able to rock out and hit the strings with any energy, or run around on stage like a rock god...

With a super-low action (see page XX) you might have trouble muting the strings because they will require so little pressure to sound, but you must. It's the downside of having such a low action. You'll find barre chords easy, but it's going to take a light touch and lots of practice to get those notes muted properly.

Quite often, power chords are played with only down-strums, and often with a technique called palm muting, which might make it less vital to mute the unused strings. But it is REALLY important to mute them because many songs do use up- and down-strums with power chords (‘Smells Like Teen Spirit' springs to mind). Also, if you don't mute them, and you play loud with distortion, the strings might ring out—even if you don't pick them—and which will make your chords sound messy. So make sure you get your string muting sorted now!

It should sound like this when you play all the strings, from fattest to thinnest (6th to 1st). Make sure the thin strings are muted.

Each chord has a "Root Note" - shown with a R, which gives the chord it's name.

The example we just played was a G power chord (also called G5) because the root note under the 1st finger is the note G. If we move the shape up the neck, we can play other chords. For instance, if you move it up two frets you get the chord A, because that is the root note you'll find under your 1st finger.

This root note concept applies to many things on guitar. In fact, it applies to pretty much everything that does not use open strings. All scales and chords that don't use open strings can just be moved up and down the neck. As long as you know which note is the root note, you will be able to find that chord or scale.

It is a big concept that will help you advance on the guitar, so take the time to learn where all the notes are.

The Notes In between

You should now know all the notes in between the "white" notes from your study of BC-152 • The Note Circle - Eventually, you should try and remember ALL the notes on the thickest two strings. You will use these time and time again, so they really need to be in your memory, not on the screen!

Starting my new Weekly Blues Lick series is a great lick from Stevie Ray Vaughan. Love this lick, sounds great and can be…

From going viral on YouTube to touring the world, Walk Off The Earth has made an impressive mark on the music scene, and…