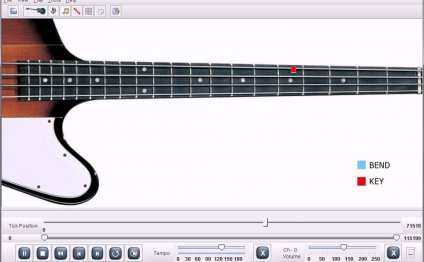 It’s always fun to write a bass lesson associated with one of David’s guitar lessons, in this case our song lesson on Van Morrison’s “Moondance.” You should read that first to get a good feel for the structure of the song. In addition, you should read the bass lesson titled, Tone Loco, as I will refer to it in this lesson.

I first started playing “Moondance” back in the 80s when I was just a novice bass player (since then, I’ve had the pleasure of playing this with a full horn section, including flute). I knew the chords from my guitar friends, but not the various bass riffs and patterns on the original recording. So I went out and bought the sheet music. As I’ve noted in other bass lessons, published piano music is an excellent source for bass guitar parts. The “left hand” music is usually accurately transcribed, with fewer short-cuts. “Right-hand” piano music is not always as helpful for guitarists. Over the years, I’ve added phrases and alternate fingerings to the fundamental bass part, but at the core, it’s a simple song, and the steady beat makes it easy to build on.

Let’s get started. Here is the basic riff for most of the verse, the chord progression of which alternates between Am and Bm. This should be played as a straight beat – four quarter notes per measure – with no anticipation. The bass provides the foundation for the guitarist and singer, and maintains the jazzy roots of the song.

Although it originally appeared on the album of the same name in 1970, “Moondance” wasn’t released as a single until seven and a half years later. It’s one of Van Morrison’s most popular songs which he’s performed live more than a thousand times.

As David explains, there is an alternate voicing for every other Am in the verse. For the bass, we can simply use the C (minor 3rd of Am) to support that, as shown here:

You can alternate these lines, or add in your own variations. If you are comfortable with walking jazz bass lines, you can have a lot of fun with this chord pattern, but that will mean that other members of your group will have to hold the “center” of the song. While I appreciate the wandering bass line in the recorded version, I don’t wander far from the basic riffs myself.

At the end of the verse, there is a transition to the chorus. In the original recording, this is only carried by the vocal, while the band continues in straight-4. However, once you try playing the riff along with the rest of the group (unison timing), I think you’ll find the added energy is addicting. As you can see, the bass line continues to ascend through the Am/Bm changes: A – B – C – D – E and then descends in two quarter-note triplets. Listen to the vocal line to get the timing (or re-read David’s notes on this topic).

The first two lines of the chorus are more rock’n’roll. The Dm to Am sequence is pretty straight forward. I like using the G in transition, but it’s not required. The second sequence has a little riff, usually played by the sax. If you don’t have a sax or flute, then you can add this fill yourself. It’s shown in the 3rd and 4th measures. If you don’t like this, just repeat the first two measures.

With the growing popularity of rock music in the mid-to-late Sixties, a great many young up-and-coming musicians were inspired—and…

My bass lessons are comprehensive and are tailored to all ages and levels of ability. Whether you are a beginning bass student…