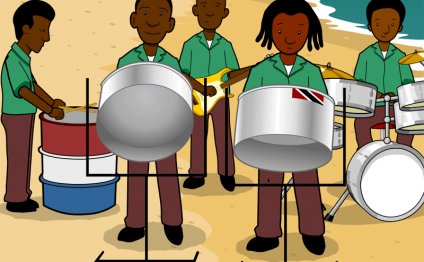 Concept/Objective: Pitch — do re
mi; move to low, middle, and high pitches.

Activity: Introduce pitch names
do re mi. Children can read about “Kuma San” on page
24 in text. Have students listen to the song raising their hands
each time they hear the words “Kuma San.” Repeat this,
but have them draw the shape of the melody in the air each time
they occur.

Additional Ideas: Use hand signs
for do re mi when singing “Kuma San.” The hand signs
are listed on page 24 of the teacher’s edition.

Activity: Listen to the song and
discuss the games in the song text. Next, sing the song and match
pitches with a melodic pattern. Have the class echo the words
of the refrain and listen to the whole song, joining in and singing
the refrain. Sing the refrain again, imitating as you trace the
shape of the melody in the air.

Additional ideas: For students to
visually see melody, present two notes on the board and have a
volunteer connect the notes to represent the relationship between
them. Gradually introduce 4, 5, and 6-note patterns.

Concept/Objective: Duration (dotted
half note, whole note, and whole rest); Students will gesture to show recognition
of durations of the previous notes.

Additional ideas: Have one group
pat the beat as the other group sings the song and pats the rhythm
of the words.

Activity: Introduce the above song
to practice the quarter, half, and eighth notes. Ask the students
to listen to the recording and pat the steady beat. Look at the
meter and identify the quarter note as the beat note. Have students
listen for the first rhythm pattern (which is shown in the book),
and have them clap the pattern each time it appears in the song.
Do the same with the second rhythm. Now identify the note that
has two beats and the one that only lasts for half of a beat.

Additional ideas: Ask students to
try to locate the one note that lasts three beats (the dotted
half note).

Concept/Objective: Dynamics/To hear
and learn or review dynamic levels and their corresponding symbols.

Activity: Teach the above song and
review or introduce the symbols p (piano), f (forte), and
(crescendo). Ask students to read about the symbols in their
books and find the symbols in the song. Listen to the recording
so that students can determine which symbol means loud and which
means soft. Also ask them to listen for what happens under the
crescendo. Play the song again and have students spread their
hands far apart as the song gets louder.

Song: “Are You Sleeping”
Folk Song from France.

Additional ideas: Have students
play bells to accompany the three notes (A, B

and high C). that go with “Brother John.”

Concept/Objective: To accompany
a song with bells, triangle, or finger cymbals.

Activity: Play the recording of
the song and ask students what they hear at the end of each verse
(bell sounds). When the class sings the song, have them play
bells, triangles, or finger cymbals.

Additional ideas: Hold down the
chord buttons and allow students to strum an autoharp to accompany
the song on the strong beats.

Concept/Objective: Melody/A series
of pitches may move up or down by steps or skips.

Activity: Ask the children to read
the introduction in their books on page 18. Choose a child to
find resonator bells G and E and place them on the bell mat in
the correct positions. Have the child play the two pitches while
the class sings and performs the body-scale motions. Ask students
how many pitches will be used to sing the first phrase of the
song (2). Sing the song with scale numbers and then with words.
Do the same to learn the remaining phrases.

Additional ideas: Ask the class
if the dots beneath each note tell them to perform the song in
a staccato or legato fashion (staccato). Then play the recording
to demonstrate this and have the class sing the song.

Concept/Objective: Pitch; High and
Low/Move at high and low levels to show distinction between high
and low in recorded music.

Music not only has the power to stimulate the mind, enrich the heart and soothe the soul; it also helps you meet educational…