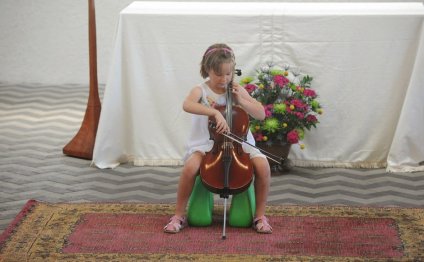 Mikhail is on the leading edge of Multi-Instrumental Instruction. With the help of modern technology for recording and teaching materials, he helps his students and friends achieve their goals in electronic composition and string instruments such as Violin, Viola, Cello, and Piano. Using a broad range of styles, and techniques, he makes music simple and fun for all ages! He provides a beautiful space for an artist to flourish no matter which direction they choose to take!

nt style in the same year.

Collaboration is very important to Mikhail, he sees his students also as his collaborators working together to create amazing works of sound. He spends part of the live practice lesson professing the deep intricacies and traditions of instrumental techniques, which are important for the subjective elements of music such as reading, pitch, tone, rhythm techniques, and playing your favorite song of choice with the other part of the lesson guiding the student to perform, and/or compose and arrange original and covered works with techniques in Live Recording in his recording studio. Collaborations with other artists do occur, and uploading music to youtube and connecting the students' musical practice to the real world is commonplace in Mikhail's studio.

He has also taught such modern classical/ pop virtuosos and prodigies such as Annelle Gregory, Vasi Hunton, and more!

If you are looking for a place to flourish musically, where you won't be judged for your ever-changing musical decisions then Mikhail is the guide for you. Mikhail may bring up a story which goes like this; Stravinsky, Bartok, Gershwin, and Piazzolla flourished under the guidance of Nadia Boulanger, and they did so by nurturing the inner self, and making it bloom into its own unique and original artist. Music is a very personal journey, and no two musicians are ever the same. Mikhail is directly related to the great jazz pianist, Leonid Chizhik, and his personal viol training is traced back to Beethoven through Fritz Kreisler who was one of his teachers' teachers' teachers.

Here are some of the Albums Mikhail Recorded:

"Lion and the Lady" with Trent Hancock released March 2015

Here is a little about his History:

Mikhail was born in the Soviet Union, and came over with his family in 1989...

He was taught Violin by his Russian Gypsy Uncle.

As a teen, he was became the Concertmaster violinist in his Sophomore year at Poway high school's 150 piece philharmonic orchestra conducted by the legendary Gary Horimoto playing many symphonies such as Beethoven, Mahler, and Tchaikovsky winning first place by unanimous decision in numerous festivals including a grand festival of over 100 high schools held in San Francisco.

During his studies at the university, Mikhail was hired as a elementary, middle, and high school orchestra director at the Creative and Performing Arts Academy Orchestra. What could be a greater learning experience than being tossed into the deep end at 17 years old?

Excelling in that profession for the last 15 years he has taught at many schools and programs including the National City School District, CCPAA in El Cajon and Clairemont... Montessori school in La Jolla, Old Town Academy, and "Camp Wings" inspiring the underprivileged youth of Barrio Logan and National City.

As a professional gigging musician in the world of performing and recording he has also done many hired gun gigs in the styles of Latin, Latin Jazz, Classical, Jazz, Gypsy, Electronic, Rock, Americana, and Pop. Been on KUSI numerous times, and has won the latest 2014 SDMA music awards.