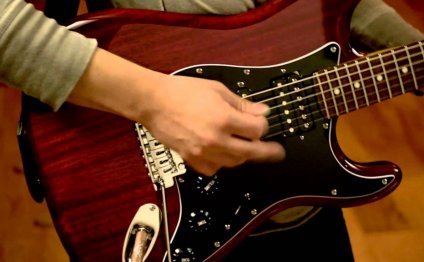 What's That Chord? Justin Sandercoe plays a B minor bar chord in a video teaching how to play the Coldplay song "Trouble." hide caption

Let's say you want to learn to play guitar — but you don't have the time or money for lessons.

Why not try YouTube? A number of people teach guitar on the video-sharing Web site, offering lessons for free.

In the past few months, two teachers have posted around 200 videos that demonstrate everything from basic strumming techniques to the opening riff of "Sweet Home Alabama." So far, people around the world have watched the videos a total of more than 3.5 million times.

One of the teachers is David Taub, who lives in San Diego and often appears wearing a flannel shirt and a backwards baseball cap. A one-time bar band rocker from New Jersey, he opens each video with the same line: "What's up, good people!"

His most popular video, a simplified version of the Eagles' "Hotel California, " has been viewed more than 125, 000 times.

The other teacher is Justin Sandercoe, who lives in London, where he teaches guitar and plays with a famous pop singer. He's a mellow presence with an impish grin. Among his song lessons is an acoustic version of Britney Spear's "Hit Me Baby One More Time" that is surprisingly affecting.

The teachers play slowly and use close-ups, showing each finger movement. If you don't get it at first, you can hit replay. It's like having a teacher with endless patience.

The lessons are informal and feel home-made. Sandercoe sometimes appears sitting on his floor, with his hair matted at different angles. Taub's lessons are mostly unedited and include moments like his golden retriever eating his guitar pick.

Taub sees the videos, at least in part, as a marketing tool for his paid instructional Web site, NextLevelGuitar.com. His videos emerged last year as an experiment when one of his students, Tim Gilberg, shot video of Taub teaching.

"We filmed about 10 minutes in his backyard, " Gilberg recalls. "I put it up on Google. Then I forgot about it. Basically, two months later I went to see how many visitors we had. There were about 6, 800 visitors, and I was like: Wow!"

Welcome to the second video of the Blues Guitar Quick-Start Series. In this lesson, we’re going to cover something very foundational…