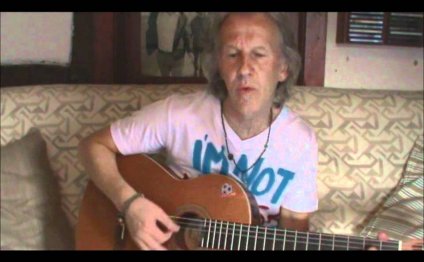 One of the (many) recurring themes throughout Guitar Noise, whether you’re working through the various song lessons, reading the Guitar Columns, playing along with the Podcasts or even chatting with folks on the Forum pages, is that we truly want you to know it’s okay to not play a song exactly the way it is on the original recording. Yes, there are all sorts of good reasons to be able to make a musical carbon copy of a song, just as there are numerous compelling reasons not to. My own philosophy is that I’d like to hear someone create music more than I’d like to hear someone copy music. Personal tastes, I’m sure, and you’re more than welcome to your own thoughts on this matter.

But there’s also a matter of what’s important in playing a song. If you’re going to be performing a song in a single-guitar arrangement, that means you have to be comfortable singing and playing. Do you really want to add “playing it exactly like the recording” to that agenda? While it may be vital for some songs (although nowhere near as vital as one might think), for the most part you can more than get by simply playing a song in the general style or “flavor” as the original. More on that in a moment…

One additional short note before we get going, and it’s the same one I gave at the start of the last lesson: while we’ve put this lesson in with the “Songs for Intermediates, ” it is certainly within the capabilities of a beginner who’s not shy of a bit of practice. If anything, it will hopefully encourage some of you not to be skittish when it comes to just ad-libbing a rhythm part.

To assist us in this examination of “how much of the original song do we really need” is the classic Who song, Behind Blue Eyes. And we have to deal with this question right from the very first note, so before we get into the structure and chords and everything else, let’s use the introduction as a way to all get on the same page.

Think about this: the first two measures of Behind Blue Eyes are an Esus4 (022200) arpeggio in sixteenth notes. That’s thirty-two sixteenth notes strung together. Even if we all agree on nailing the first note, the E of the open low E (sixth) string, that gives us thirty-one chances to screw up the beginning of the song!

More important – Do you think that Pete Townshend sat down and deliberately wrote out exactly what note should be played first, second, third, etc., ? Not very likely! He probably turned on the recorder and then “got up his guitar and played.” The second take he played he may have kept certain notes here and there but, in all probability, didn’t get it exactly the same. He might have – artists all have their own individual footprints, little stylistic touches that come from their own personal experiences in playing.

If you think of the sheer number of variations possible, just playing two measures of sixteenth notes, it’s kind of mind boggling. And that’s not even taking into account that you don’t have to play nothing but sixteenth notes. Notice in the following “Example 1B” the cool effect by tying together one pair of sixteenth notes into an eighth note. That gives the music a little breathing space and makes it sound even more natural.

So here, just to give you a concrete, audible idea of what we’ve been talking about, are three examples: first, the “note for note” recording, and then two variations that were simply put together in the same basic style, or “flavor” of the original:

Now you can argue until doomsday as to which sounds “best, ” but the bottom line is that anyone listening to you play any of these will immediately say, “Hey! That’s Behind Blue Eyes, isn’t it? I love that song!” And that’s all you’re looking for, unless your day job is being the guitarist in a Who tribute band (and wouldn’t “Who Are We?” be a great name for such a band?).

To repeat a point I can’t stress enough – if you’re playing a song and your brain is on overload because it’s trying to make sure every note is correct, you’re going to be way too tense to play.

Behind Blue Eyes Guitar Lesson part 2- The Who - CORRECT

Behind Blue Eyes Guitar Lesson Pt.1 - The Who

Guitar Lesson & TAB: How to play Behind blue eyes by Limp ...

If you ve ever traveled overseas, you also likely picked up one of those foreign language phrase books to help you communicate…

Well, Christmas is just a few days away so I thought it would be cool to show you guys another nice solo Christmas arrangement…