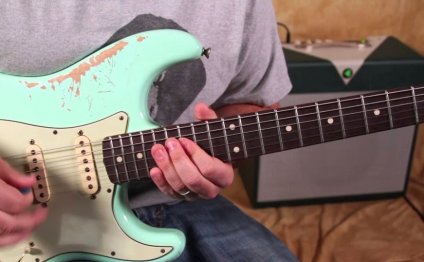 Welcome to the first video of the Blues Guitar Quick-Start Series. The blues is an important style of music to learn well, especially when you’re a guitarist. The blues is important on its own, but it’s also an important part of other music styles like country, jazz, rock, and metal. The blues was a heavy influence on famous guitar gods like Jimi Hendrix, Jimmy Page, Stevie Ray Vaughan, and Eric Clapton.

The blues is kind of a hybrid between a major tonality and a minor tonality, so it’s like its own world. One of the best things about the blues is you can learn just a couple of small things and then jump in to playing and expressing yourself. If you learn to play the blues really well, you’ll have an excellent tool and color to use in your guitar playing, and when it’s appropriate, you can pull it up in other styles of music you play too.

There are a few things that it would be good for you to know before you start the Blues Guitar Quick-Start Series. We’ll be going through everything step-by-step, but it would be good if you know basic bar chords, basic power chords, the shuffle rhythm, note subdivisions, and hammer-ons and pull-offs. If you need to review any of these skills, you can check some of my other lessons.

It doesn’t matter if you play acoustic or electric in this series because everything we’ll cover is equally important for both types of guitar. The goal of this series is to make sure you’re familiar with the most important things you need to know for blues rhythm guitar and blues lead guitar.

After you’re familiar with the blues scale, I’ll teach you how to start choosing your notes rather than just randomly playing through the scale shape. After that, we’ll look at turnaround licks and how they can be incorporated into your playing.

Finally, we’ll see how to interject blues lead licks into the 12-bar blues riffs you learned. Just the like all the other series I teach, I have jam tracks for you along the way because it’s always important to apply everything you learn to real music.

This series will cover a lot of information, and it will be up to you to decide how far you want to take it. I feel that the blues is the style of music that crosses the most musical boundaries so it’s really important for you to get down really well. The stronger you get with playing blues music, the better the rest of your playing will be too, no matter what style you’re playing.