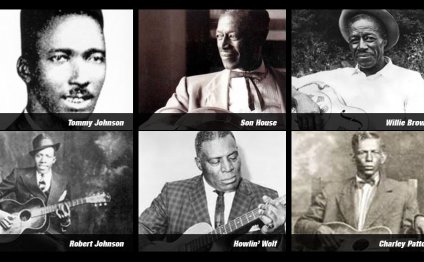 He created an essential body of blues guitar music, recording 29 songs in 1936 and 1937 that would exert a powerful influence on the likes of Eric Clapton, Jimi Hendrix, Keith Richards, Johnny Winter and many others.

In this edition of In Deep, we’ll examine the variety of picking techniques and tunings that Johnson used to craft his timeless, deeply emotional music.

One of the staples of Johnson’s style is his ability to sound at times like two guitar players, combining driving rhythms on the lower strings with melodic figures on the higher strings. Due to the fact that his recordings were intentionally sped up when first released, definitive analyses of his tunings and capo positions is near impossible. That said, the interpretations offered here are practical and easily achieved.

Johnson’s tunings can be broken down into four categories: standard tuning, open G, open D and drop D. Some of the songs interpreted as open G or open D may have in fact been performed in open A or open E, respectively.

Let’s start with standard tuning, which is the tuning Johnson used for the recordings “Kind Hearted Woman Blues, ” “I’m a Steady Rollin’ Man, ” “Love in Vain” and “Sweet Home Chicago.” The last song was performed in standard tuning with a capo at the second fret. A complete transcription of “Sweet Home Chicago” begins on page 126 (note that all tab numbers represent the distance from the capo; i.e., “12” represents 12 frets above the capo, though the note is actually played at the 14th fret).

The intro is a “turnaround, ” normally found in the last two bars of a 12-bar blues progression. Johnson started many of his songs in this way: through bars 1 and 2, the high E tonic note is used as a pedal tone while other notes descend the D string. At the end of bar 2 into bar 3, he transitions to B7, the five chord.

The verse is initiated at bar 3, and at this point Johnson creates the sound of two “voices” by playing a solid rhythm on the bottom two strings, alternating between root-fifth, root-sixth and root-flatted seventh chords while adding melodic notes on the G and high E strings. In bars 13 and 14, he performs a different turnaround, alternating between descending two-note figures on the G and B strings and the open high E.

Johnson achieved great definition between the low and high string parts by fingerpicking and using a thumb pick. I perform these licks using hybrid picking, holding a pick between the thumb and index fingers and using the other pick-hand fingers, primarily the middle and ring, to fingerpick.

Played in the same tuning and capo position, “When You’ve Got a Good Friend” features a similar intro, albeit one slightly more complex in the fingerpicking pattern. Here, Johnson incorporates irregular bar lengths, a common practice among country blues guitarists.

FIGURE 1 includes a bar of 3/8 at the end of the intro, which functions as a pick-up for singing. In evidence again is the inclusion of simple melodic additions on the G and high E strings played against the driving rhythm of the low strings.

“Love in Vain” was performed in standard tuning in the key of G, with the capo at the first fret, as approximated in FIGURE 2. This excerpt starts with a turnaround consisting of chromatically descending double-stops (two-note figures), thirds apart and played on the top two strings.

In the verse section, the strong rhythm is maintained on the bottom strings while harmonic interest is added through subtle changes in chord voicings on the top two strings.

While these high notes are allowed to ring, the lower notes should be slightly palm muted and played with staccato accents. Bar 9 offers a twist, with a shift to the II7 (two-dominant seventh) chord, A7, before resolving to the five chord, D7/F#, for which the low F# bass note is thumb-fretted.

Johnson employed open G tuning (low to high, D G D G B D: see FIGURE 3) for tunes such as “Crossroad Blues, ” “Walkin’ Blues” and “Come on in My Kitchen.” He utilized specific chord voicings designed to work with open tunings, as shown in FIGURE 4, akin to “Stones in My Passway.” The example begins with slide guitar (Johnson wore a metal slide on his pinkie), before switching to chord voicings made up of all open strings combined with notes fretted on the top two strings.

The verse section (bar 5) features classic Johnson chord voicings for G6 and G7 on the downbeats of beats two, three and four. In bar 5, the four chord, C7, is sounded by barring across the top three strings at the fifth fret, adding and removing a high Bf note at the eighth fret of the first string.

The final example is played in open D tuning (low to high: D A D Fs A D), illustrated in FIGURE 6. FIGURE 7 offers an example in the style of “Ramblin’ on My Mind” and features slide guitar extensively. The example begins with slide figures, positioned on the top four strings at the 12th fret and played against the open low-string “rhythm” part. When playing these slide licks and vibratos, position the slide directly over the fretwire for proper intonation.

The verse (bar 6) consists of four bars of the one chord, followed by two bars on the four chord, G7, fretted at the fifth fret. Likewise, the five chord, A7 (bar 14) is positioned at the seventh fret.